Two strangers on a nature walk around Ari

It was 7 o’clock. Today’s first achievement had been tearing myself out of bed to be standing in front of the Ministry of Natural Resources and Environment building. I was waiting for a person called Bas and wondering how this walk would turn out and what kind of person he was. Who in the world invites a stranger out to observe nature (biodiversity) at 7 in the morning?

The walk started almost as soon as we met. Bas began by sweeping his hand towards the trees along the street. “Do you smell it? Lawson Cypress. People say they’re mosquito repellent.” Before I could ask if they really work, he briskly continued, “We’re having a serious play today, as if we were children.”

For me, “serious play” meant stepping into a puddle on a rainy day, my bare feet in muddy water becoming those of a giant standing in an ocean in my mind. The words helped me catch on to what Bas was doing almost immediately. He was seriously collecting the data about his environment, albeit with the curiosity and imagination of a five-year-old.

I can say that he was here to collect data. We had barely started out when he began to meticulously take pictures of “flower flies” hovering over the stamens and pistils. He had high-quality binoculars that I had never used before. I quickly shifted gears to feel some of his excitement as I had never seen anyone this fascinated with sidewalk vegetation before.

We headed into the park behind the Government Public Relations Department building to watch birds. I noticed for the first time that there’s a whole range of birds in the city besides pigeons and sparrows. Bas led me out of the pathways to the base of each tree and bent down to see an ant colony under a small cluster of mushrooms. This is our kind of serious play.

“I’m no scientist. I just explore out of curiosity. I have answers to some questions, but by no means am I a teacher. The teacher is this–”

Bas finished his sentence quickly, raising hands, implying that the teacher is our surroundings.

Even with that said, Bas is definitely more knowledgeable about nature than the average person. We entered a waterlogged part of the garden where a bunch of Colocasia rose above the swamp. He speculated that the soil on this spot contained enough moisture and minerals for the plant to grow. We saw that it was a giant swamp but how come the Colocasia only grew here.

“But how did the seeds (or whatever it was) get here?” I asked.

Bas looked satisfied with this question and said, “Try guessing the answer.”

“This is just my guess, but I’d say bird poop. Sometimes seeds are dropped with bird feces,  and sometimes they’re brought by rain.”

“How is it possible with the rain? Rain is just water. “

“Rainwater can wash seeds from other places and leave them to grow here.”

It might sound strange, but I was amazed by the unexpectedly systematic coincidences of nature at that moment. Whatever I had seen from documentaries paled in comparison to real experience. Bas pointed out that tens of small plants huddled up like a tiny forest in each patch of grass under my footstep. There were petite habitats such as millipedes, insects, ants, or even little frogs. All this is just one small area we explored.

“Exactly, this is nature.”

Shortly after, I thought about Bas’s childlike exploration again. I couldn’t help but think how great this would be for children’s education, so I mentioned it to him.

“I think it’s too late for the children of this generation.”

“If by now the adults haven’t understood, then it’s already too late.”

Bas probably meant the world situation that is getting more disheartening by the day. If we teach anyone about something, it’s best to teach the adults to appreciate it and pass it on to the children.

Soon I had learned so many things that I could barely keep up. The water in the pond looked green because certain planktons are in bloom during the rainy season. In other seasons, the water usually looks brown thanks to the soil color at the bottom or soil colloids in the water. After a while, I got to hug a tree and put my ear to it. I heard a watery sound like you’d hear putting your ear to a pregnant woman’s belly.

“Correct. For a tree this size, you can imagine how much water it needs to nourish all the way up to the top. I like to let people listen to this tree because it doesn’t have a rough bark like the others.”

Suddenly I had a picture of a tree-shaped fountain in my head.

“Serious Play” wasn’t the words Bas used on a whim; that was what the day felt like. It was more play than seriously studying. Bas didn’t act like a teacher; he was my walking companion, only this companion already had your route planned out. The discoveries he brought you, though, were infinite.

How often have you gone on walks like this? “

“This is probably the tenth time.”

We returned to the neighborhood of Piboon Wattana. In the dampness left by the rain, Bas pointed out that even though a minor groove on the street, a seedling can still sprout. He showed me a tree that had squeezed its way through the man-made surface.

“Can you tell by the leaves which tree it is?”

“Banyan,” he said, pointing to a skinny tree that looked like a weed.

“Can this grow into the big banyan tree?”

“Yes, when the root is developed, it can even destroy a house. You have to kill it with hot water. It’ll only regrow if you just pull it out. “

The efforts of the plants to thrive and grow are pretty admirable, a puny weed turning into a massive tree. Meanwhile, humans are primarily in the way.

At one point, Bas brought me back to a pond in front of the Ministry of Natural Resources and Environment, also known around Ari as “Resource Ministry.” Some neighbors had been dumping their sorted waste here. Bas led me through the garden with benches and people to the back, where the dense grass reached half of my shin.

Have I mentioned that we were still strangers at this point?

“What if there are snakes?”

“I’ll walk in front. This is true nature.”

Bas later explained how nature is simply beyond our control. People are used to being in control of their surroundings. Too hot? Air-con on. Too cold? Heater on. Dangers are minimized. Being out in nature is to lose your control, and in some way, it’s humbling.

We talked about the rewilding of land. I threw “popping pods” into the water. I waited for them to break while Bas watched a nearby waterfowl with his binoculars.

“Kids back then must really have had nothing to do to start throwing these in the water,” I said to Bas.

Almost eleven o’clock, Bas and I sat down on a terrazzo bench in front of the Resources Ministry. As a governmental office, I had never thought of visiting the place without a good reason. Bas opened an encyclopedia of birds in Southeast Asia, flipping through each page to find out which birds we had encountered while teaching me how to quickly consult encyclopedia references. Looked like Bas didn’t find any new birds today.

After that, I summed up today’s feelings and thoughts in a post-it, and we wrapped up with the last question: “What is nature?”

“There’s no wrong answer. Just say what you think.”

“Hmm, I think nature is most of everything. It’s the origin and the fate of all things. It’s easier to say what is not nature: everything the humans make and develop. At first, they might be inspired by nature, but things are developed into technology and culture. For example, rectangles and triangles, which can’t be found in the universe. I consider them non-natural.”

As for Bas, he believes that

“Nothing can be separated from nature. Nature is one whole existence, all of us included, even when humans view ourselves as the top of the food chain. Being hunted by tigers, we invented guns to kill the tigers only to fall prey to diseases in the end.”

Even though we were no longer strangers, I only got to know Bas when I switched my role to the interviewer. Who is this man, and where did he come from? 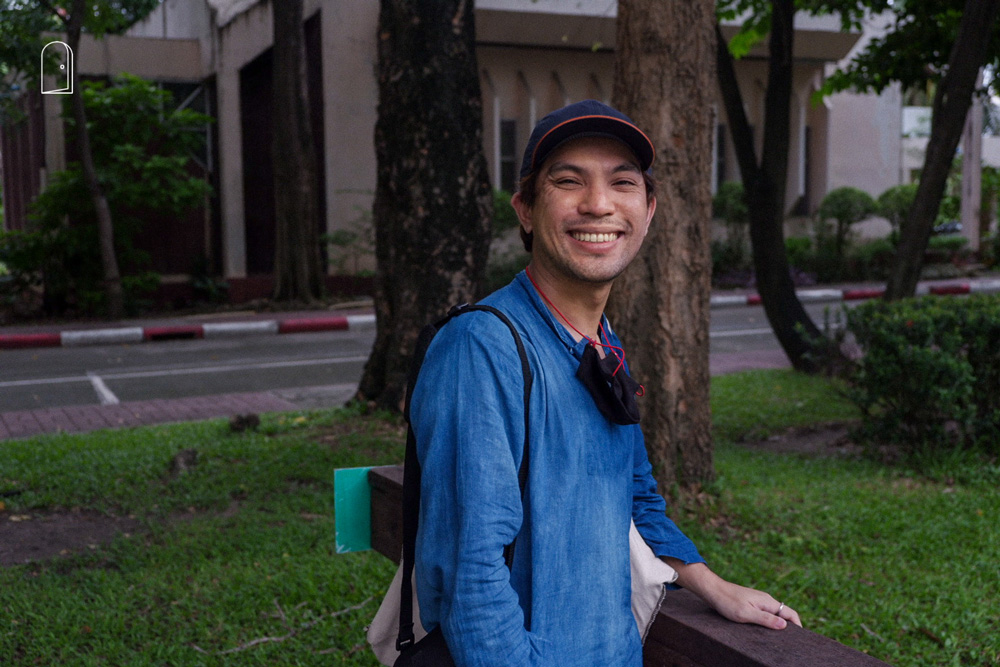 Bas has been living on Soi Sai Lom (the opposite of Ari) for about 5 years. His parents were business people who wanted their son to study in a marketable major. He, however, aspired to work in a park, and naturally, his parents were horrified by the idea. However, the 7,500 baht monthly pay at that time was not enough even for Bas, so he took an exam for the Faculty of Veterinary Science at Chulalongkorn University. His university choice was approved by his family at least, even when it didn’t quite suit his lifestyle save for the 6th year when he began to really treat animals.

Soon after, Bas started a business from his family garden. The garden, which produces mainly lemons, is called Phasuthara and is located in Ratchaburi province. He was responsible for the product lines from his family garden produce before moving to Ari to build his own cleaning product brand, Ali Everyday Products, which tries to minimize its environmental impact.

Every Sunday morning Bas, who doesn’t want to get up like the rest of us, drags himself out to explore nature in the Ari neighborhood. He always says that he is neither a scientist nor a teacher and isn’t collecting data for any purpose. He just wants to explore, take a walk, and bring himself closer to nature.

No matter how scarce it may be.

The Saga of “Biew”: the Best-Known Being in Ari